This post is going to seem a bit odd, as it will revolve around what's often referred to as "drama" from the Portland comedy scene. Referring to a man accused of rape by multiple people and the resulting fall out and argumentation around it as "drama" leaves a bad taste in my mouth, though. Accountability is important, it is difficult, and it doesn't have an expiration date.

So, for those of you here because of my social media posts on this subject--here's the background on Nicky Moon, an infamous local figure in the Portland comedy scene, infamous namely for the multiple accusations of rape against him.

To the Portland Comedy Scene's credit, he was and is banned from the scene years ago. So why, you might ask, are we suddenly talking about him again now? Well, the answer to that lies with a public post made be one Lydia Manning featuring Nicky Moon in a fun, positive light.

On October 19th, Lydia Manning made a casual post about her in the pumpkin patch with Nicky. You can view the public, feel-good post here. 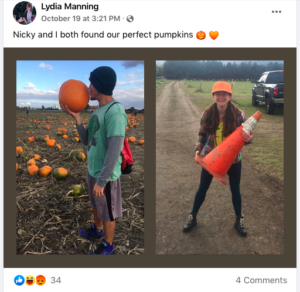 Above is a screenshot of the post in question. It outraged me for several reasons, the main ones being that it was cruel to post this abuser's face in a fun, innocent context, especially considering some of his victims are/were friends with Lydia and were bound to scroll past and see this and it very much normalizes his presence as wholesome, fun, and safe. It's worth noting the only two angry reacts on that post is from myself and Jane Malone, so even if he definitely isn't back in the scene anymore, his presence adjacent to it is apparently something too many Portland comedians are totally fine with.

I unfriended Lydia (not that that means much, especially since I deleted my entire personal Facebook account a couple weeks later), and Jane made a public post about how she refuses to normalize Nicky Moon. Gabby Jesus also made a post on the topic, calling out comedians for not permanently cancelling rapists if the rapist is attractive.

The following screenshots are messages Lydia sent to Gabby in response. 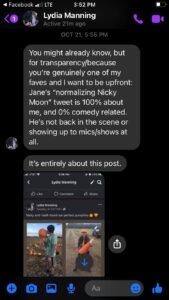 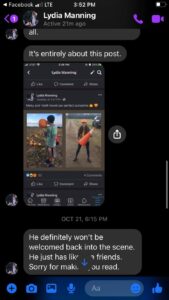 Soooo... whatever? Jane and I unfriended her, shelved our disgust, and kept a mental note she's not a trustworthy person with safe associations. And we all moved on. The posts made got very little attention. They could barely be considered a repercussion of any meaningful capacity. It seemed to have all been blown over and been swept under the rug. And then...

Two weeks after she'd made her post, Nicky hopped on the replies (oddly enough bringing more unwanted attention to a status that had a grand total of two likes and already largely disappeared from most people's thoughts) with some rather, uh, choice words. He has since deleted all the following replies to Jane.

Gabby has also posted her own reply to Nicky, which he did not respond to (unless you count deleting all his tweets as a response). 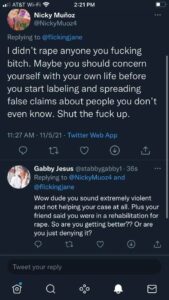 I don't give a fuck about Nicky Moon. But I'm not going to tolerate this "live and let live" bullshit when he very clearly has zero fucking remorse and ultimately survivors of his attacks have suffered far more than he has. A man with pretty obvious anger issues and zero remorse or respect for anyone he's harmed does not deserve second chances in any way. I'm sick of this shit. Sorry this post didn't end in a more articulate way, but I just need to get this out there. Because our society has a severe avoidance problem when it comes to consistent accountability for predatory men and I personally don't want to be a participant in that kind of toxicity ever again.