Benjamin Tier is a tour guide, comedian, and writer turned independent reporter. His first Black Lives Matter protest was in St. Augustine, FL, and after relocating to Portland, he began following Teresa Raifford, the founder of Don't Shoot Portland who ran for the office of Portland mayor in 2020.

“I listened [to] black mothers saying, 'How fast is my son supposed to walk? How slow? What kind of clothing should he wear? What exactly can he do to not appear as a threat?'” Tier recalled of the Mothers 4 Sybrina rally he attended in Florida. “I'll never forget how so many white men...walked by with their families and yelled, 'Get over it!'”

Tier describes his history of activism as “showing up, listening, and signal boosting.” He has a strong focus in keeping people informed, especially those from across the country who may not be aware of the prevalence of racism and police violence in the Pacific Northwest. “I insisted that the police and right wing violence here could happen anywhere,” he said.

It is perhaps Tier's activism in raising awareness and keeping people educated that paved the way for expanding into independent reporting. “A friend of mine helped me secure press credentials, not that they really seem to matter much,” Tier said, referring to wave of police violence against journalists which has swept the nation but seems to have been especially prominent in Portland. 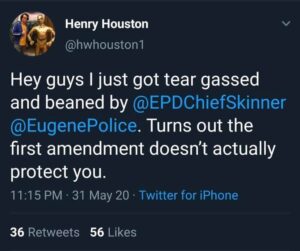 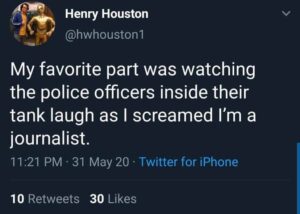 “My goal is to elevate the voices and perspectives of the more radical elements within the protests, as I feel they are often overlooked.” Tier has raised concern about the degree to which more radical voices—especially the voices of activists of color—are undercut, dismissed, and ignored in broader dialogues that seek to appeal to a centrist audience. “Local leadership and corporate media are perpetuating a 'good protester vs. bad protester' narrative, heavily implying that it is only a bunch of violent white kids on one side and gentle, quiet Black people on the other. This is of course...serves to erase the BIPOC voices that are calling for more than conciliatory piecemeal reforms.”

Of this trend toward the erasure of radical voices within the movement, Tier said that “There have been a lot of efforts to pacify, de-radicalize, and co-opt the movement. I can't say I know everyone's motivations but the perpetuation of the 'good protester vs bad protester' is an attempt at de-legitimatizing efforts toward actual change. There are plenty of protesters themselves who can naively fall into this trap. 'If we just do what the cops want, they won't hurt us.' Well, they will still hurt you, and furthermore, now you're not actually standing up to them.”

Tier has primarily heard misconceptions about the movement second hand, but this has changed as he's delved deeper into independent reporting and more people have began following his reports from the protests. “There seems to be this pervasive myth that the city is in complete chaos. The protests themselves are usually contained to small areas downtown or in North Portland. Any time they expand beyond that is usually a result of the police brutalizing people and chasing them around.”

Tier's reference to police “chasing” people evokes the more brutal imagery that has been arising from the Portland protests, including videos of police lines advancing on and becoming physical with protesters. Many protesters, including a street medic we interviewed for our debut Stories From the Front Lines, have talked about being boxed in or “kettled.” In these situations, the protesters' movements can be manipulated by the staging of police lines. Many protesters assert that this tactic has been used to escalate tensions or provoke violence, therefore enabling the police to declare and otherwise peaceful protest a riot. 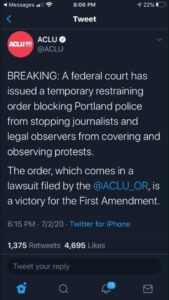 “Part of the myth is that there must be rioting every night,” Tier went on to say. “Outside of a few random broken windows, the only real looting happened for two nights way back in May. People seem to want to believe that the protesters themselves are violent looters, because Americans have this deeply ingrained obsession with property. I would ask these folks, 'What matters more to you? A well-insured corporate building? Or a human life?'”

Discussion of the degree to which Americans tend to value property over black lives, as exemplified by the national response to looting in the immediate wake of George Floyd's death as compared to the response to police brutality throughout the years, became a center-point discussion around the protests in late May and early June. In the Minneapolis protests reports came out of bad-faith actors destroying property, presumably to undermine the movement, while protesters attempted to prevent such destruction. One notable example was of a man with an umbrella and mask breaking the windows of a local AutoZone. (1) In Portland, the police made a bid to cite property damage (to the tune of $23 million) caused by the protesters, as a historically proven means to undermine movements that challenge the status quo and systems of power. This number, as it turned out, was largely the result of COVID-19 closures on a Portland mall, not damage from protests. (2)

Increasingly, the dialogue around property destruction during times of civil unrest has expanded to include discussion of property destruction as a valid means of challenging institutions of power and systemic oppression. (3) The rallying cry that “Property can be replaced, Black Lives can't” became a poignant response to anxieties about property destruction in the early days of the Minneapolis protests.

“I don't think [people concerned about property damage] can wrap their minds around the fact that the police response to protesters is extremely disproportional,” said Tier, “as that is too threatening to their comfortable, orderly worldview...People need to know that this movement is about justice over order...the people on the streets are not going to be scared away anymore. The ultimate goal of this movement is to create a better world for everyone, and if you feel threatened by that, what is it you actually value?”

The disproportionately violent response of police at Portland protests are not Tier's first brush with such violence or threats of violence. His experiences at marches such as the rally in St. Augustine has prepared Tier for the reality of clashing with police and right-wing instigators. “Both groups...display similar patterns of instigating, escalatory behavior,” he said. “Additionally, being threatened by armed dudes in [a] pickup truck with American flags all over it is nothing new. That's something I dealt with quite frequently in Florida.”

“There are definitely fascists who drive around the protests looking to antagonize people. Additionally, Andy Ngo [a conservative social media journalist who has been reporting on the Portland protests] has a bunch of followers who jump at the opportunity to dox anyone who has been arrested,” Tier said. “My friends have had cops show up to their doors at weird hours...demanding a conversation but with no warrant. I personally have been intimidated by a police officer taunting me and pointing his gun from his cruiser.”

Despite harassment, threats, and escalations of violence, protesters continue to show up in Portland and in other cities across the country. The protests, many will say, are working, pointing to major victories such as the disbanding of the police force in Minneapolis.

In Portland, the story has unfolded differently. “There have been a lot of small policy victories and electoral resignations, but most importantly the intensity and duration of these protests have laid bare just how impotent our elected officials really are,” Tier said. “Our supposed 'progressive' leaders use a lot of hollow words to condemn systemic racism and violence, but when put to the task of action, they fall miserably short. It is important that people see...and remember this. People who seek power in our current system have very little genuine interest in changing it.”

One such politician protesters have expressed frustration and lack of faith in is Portland Mayor Ted Wheeler. “Wheeler is despised,” Tier said, stressing that Mayor Wheeler is not an ally to the movement, and that the feds are not markedly worse in their treatment of protesters than the Portland Police Bureau. “[T]he feds are virtually indistinguishable from [PPB] in terms of their behavior.”

As a result of Black Lives Matter, America is having a more nationally-engaged conversation about race and racism than has been seen since perhaps the 60s. “On a social level, people are having all kinds of conversations that they probably wouldn't otherwise be having,” Tier said. “We're being forced to very seriously imagine how to rebuild our society, and how to care for and about each other. Going forward, I want to see us build a system with leaders who are not beholden to corporate interests or police unions. Ideally, I want to live in a city where when I witness or experience an emergency situation, I have services I can call that will provide people who are properly trained to handle that specific situation.

“Everyone should have access to food, healthcare, and a roof over their heads,” said Tier, referring to the argument that meeting people's basic needs helps reduce crime by taking preventative action addressing the root causes of crime. (4) This argument, prompted by the Black Lives Matter protests, is gaining greater traction as the debate over police defunding and/or abolition has entered mainstream discourse.

Despite the heavy nature of much of the news coming out of the protests, Tier describes an incredibly lively, hopeful, and sometimes pointedly jovial undercurrent to these protests. While acknowledging the overwhelming whiteness of Portland, Tier described the protests as “some of the most diverse events I've attended in this city...I've seen so many openly queer people putting their bodies on the line night after night. We have moms, dad, vets, doctors, nurses, lawyers, chefs, servers, and so many other everyday people from all walks of life showing up and holding it down.” 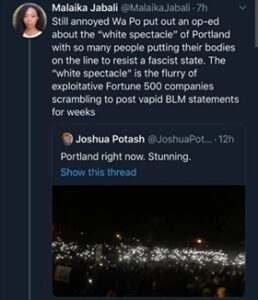 The momentum of so many people of such diverse backgrounds coming together paints a potent and powerful picture, as does the willingness of protesters to engage in pointed jests. He described a scene in which “someone brought a bunch of pig feed” which was used to throw at cops, who later ignited the feed with a flash bang and started a fire. Another recent moment featured “This is America” by Donald Glover blasting from a speaker at one end of the block while another speaker at the other end of the block played the “Imperial Death March” of Star Wars fame.

“The feds were shooting and tear gassing us from behind the courthouse fence,” Tier said. “I stood in the middle and danced with a bunch of other journalists and protesters.” These moments of levity and embracing whatever might come, he said, showed “the authorities and each other that we are not scared. Courage,” Tier said, “is contagious.”

At the end of the day, Tier expresses an almost aggressively positive outlook when he invites people to join the protests. “I'd encourage people who are supportive but haven't yet attended to step outside their comfort zones...and stick around when shit gets weird. You don't have to be on the front line, but you really need to experience the unity....of your community firsthand so that you can see how the rest of us can be optimistic about the future.”